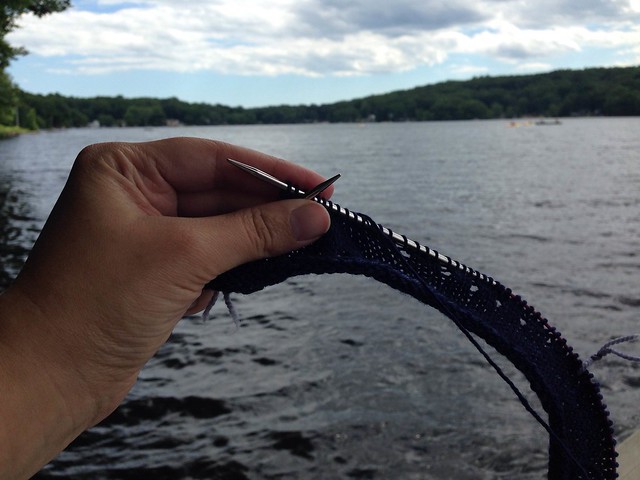 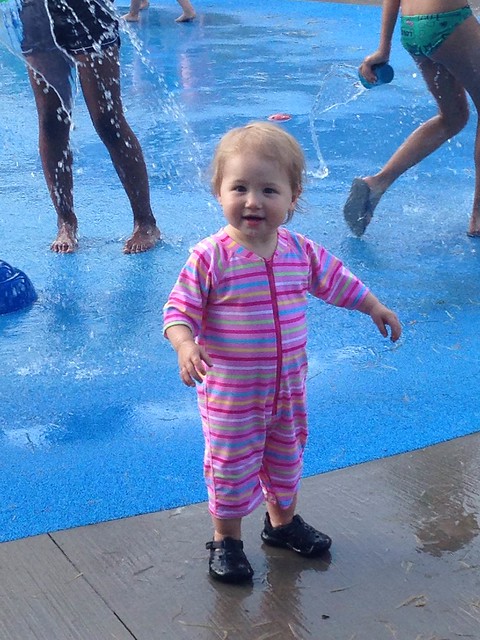 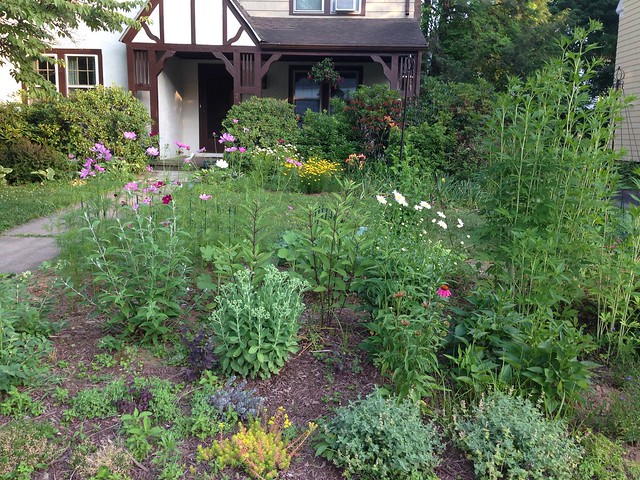 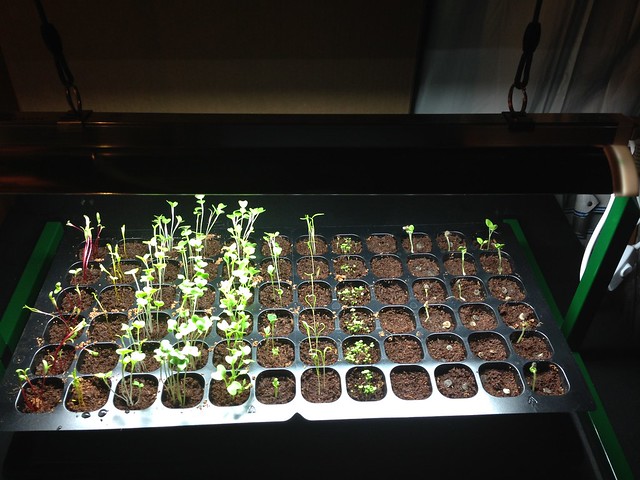 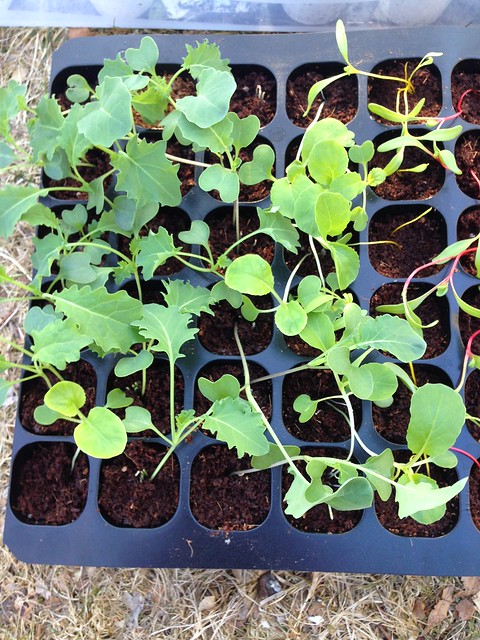 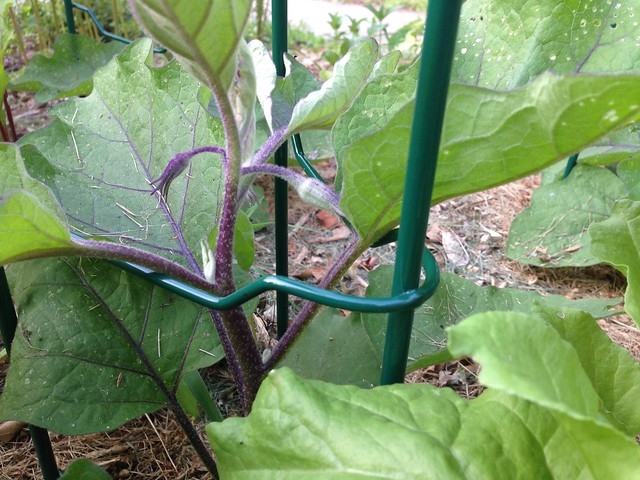 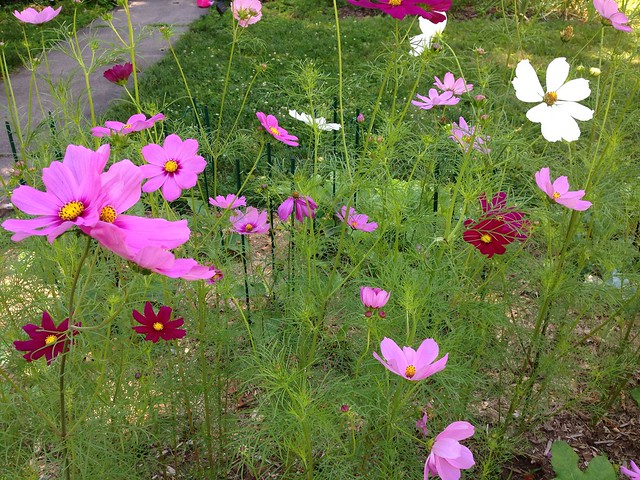 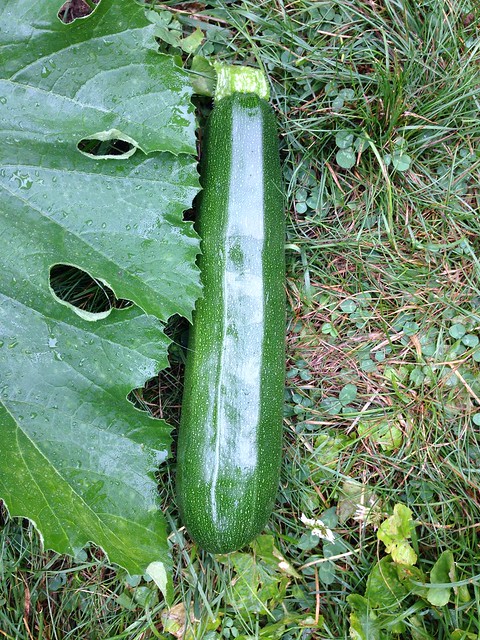 I’ll begin by highlighting my Vivian, my most important and consuming WIP.

She’s also not the only baby in the family, my cousin had baby Ryan three weeks later. I started a simple log cabin baby blanket for him (based on How to Log Cabin in Mason-Dixon Knitting) shortly after Vivi was born. It is excellent maternity leave mindless knitting.

The floor tiles are 12-inch squares, so you can see that it is about 2 1/2 feet to a side now. I feel like I should add at least one more strip to each side. That would make it a small but respectable stroller blanket at 32ish inches to a side. I’ll see them at Easter, I can finish it by then.

Meanwhile a good law school buddy had baby Andrew, and I started a Moderne Baby Blanket (also log cabin style) for him. I’m thinking this as a color scheme.

Vivi is starting to sleep for longer stretches, and a couple hours of garter stitch and stupid TV after she goes to bed does wonders for my outlook.

How to Induce Labor

At the end of one’s pregnancy, one hears all sorts of stories about how to induce labor. Eat Chinese or Mexican food, I was told. Take a long walk. Engage in other activities I won’t discuss on the blog. Well, I am here to add another story to this long tradition.

Vivi was born just after 8:00 pm on December 14, two days before my due date and less than 22 hours after the blanket was finished.

She’s the best Christmas present ever.

PS: Since this is a knitting blog, I’ll mention that the blanket is a classic feather-and-fan in 10 colors of Berocco Comfort DK, on #8s.

Yeesh, has it been two and a half months? And I never posted my Ravellenic Games shawl? In a moment you’ll understand why.

I’ve been hard at work on another project, with an estimated completion date in the middle of December.

I had an awesome time at Rhinebeck with the gals this year. My Ravellenic Games shawl won third place for small knitted item from handspun!

Here are a couple more pictures, since I never did a proper FO post back in August.

I have been knitting, as you can see from the modified Harvest Moon you see there, knit from the berry yarn I spun this summer. As you may recall, I bought the fiber at Rhinebeck last year. I returned to Spinners Hill, and you can expect to see me in a dark purple sweater (with mini-me in tow) next year.

Purple was the color of the year for me:

In the front row we have Fiber Optics Footnotes in Jelly Jelly #5 (baby sweater!), a Fiber Optics wool-silk blend in lovely autumnal colors, an Into the Whirled wool-silk blend in Targaryen (light purple-gray), a Gale’s Art blend of purple silk and brown alpaca, three colors of Miss Babs Yummy 2-ply for Color Affection, and Miss Babs alpaca lace in leaf green (another favorite color of mine). I can still knit after the baby… right?

I have spun 16 lots of yarn. This is my favorite.

I finished Sunday at 11:30 am. For a few hours I considered submitting the finished yarn to Rhinebeck. Then I decided that the yarn would shine better in a half-circle shawl that showcased the sunset colorway.

I cast on for Shattered Sun less than four hours after I finished plying. Yes, I washed it. Yes, it was (mostly) dry. Hey, the Olympics end in a week, I don’t have forever!

I am super excited to make my Tour de Fleece yarn into a Harvest Moon Cardigan for Rhinebeck. But that’s going to be a fun, relaxing pattern. Cramming it in to 16 days would ruin it, and wouldn’t be true to the Ravellenic spirit.

Instead I decided to reprise my Winter Games 2010 victory with a fleece-to-FO challenge. For some reason the 2012 games do not have such a category, so I’ll enter both the spinning and the shawl categories.

I watched the Opening Ceremonies with Jacie, and had made good progress by the end of the night.

Per Jacie’s suggestion, I tore the batt into strips. I pre-drafted and rolled into roving balls like I always do, so it was not that different from spinning from top.

By the end of a rainy weekend watching the Olympics (am I allowed to say that?) I had finished the singles.

That tiny bobbin is there because one of my little roving bundles rolled under the couch. I’ll try to find where it should have gone in the sequence and splice it in.

It went well, but for one issue:

When the first bobbin was about 2/3 full, the yarn stopping winding on evenly and started kinking up. I fiddled with the band tensions and it did not seem to help. When I switched bobbins the singles wound on evenly again. Experienced spinners, what is causing this?

Huzzah! I have succeeded in spinning all of that berry-colored fiber into just under 1100 yards of slightly variable worsted-ish yarn.

I am pleased with how it turned out, both the weight and the marled coloring.

In particular, I am astonished at how well my plan of plying light with dark worked out.

When all was said and done, this was all that remained of unplyed singles. I very seldom wind up with a bobbin that small at the end, even when only spinning 4oz!

One thing I was not thrilled with is how many times I had to wash to get excess dye out.

I had expected this, given how the fiber turned my hands pink and left a nice pink streak on the left thigh of my PJ pants (it washed out fine). But still, it’s annoying. I rinsed four times and the water was still pink, but I was starting to worry about agitating the yarn too much.

So now the yarn is drying. I don’t think I felted it. Should I try to knit my sweater during the Olympics or would that be dumb?

… to bring you the first finished object post in forever!

These are my best socks so far. The pattern has plenty of stretch, so I can get them over my heel but they still fit well through the calf. I have large calves, so I did extra shaped ribbing on larger needles.

I love the little details, like how the pattern melts into the heel…

While it is much to hot for wool socks now, I’m sure I’ll wear them often once it cools off!

On day 5, I spun some more. I am getting over a nasty cold, so I had a very quiet Fourth and got a lot of spinning done. While experts advise that you should spin all your singles before you start plying, who has that many bobbins? (Don’t talk to me about winding singles off bobbins and into cakes – I know that for me the singles would get hopelessly kinked. I just don’t view it as a workable option.)

Anyway, once I had four bobbins worth of singles (two dark and two light) I got out my jumbo flyer for the first time and got to plying (on the left, with regular flyer on the right for comparison).

This bad boy can hold a lot of yarn!

That’s 150 yards of heavy worsted, to be exact. From the other set of bobbins I got 122 yards.

I am pleased with how it’s turning out. It’s more even overall than I had predicted.

So, the quest for a Rhinebeck Sweater pattern continues, now with more detail. I estimate about 1000 yards total, suitable for size 9 needles. Any good ideas?